Blindness Misconceptions:
From Humorous to Hurtful

BLIND: what comes to mind when you hear that word?

Do you know someone who is blind? Do you wish you did because there are things you want to know?

Maybe you realize that a blind person is just like anyone else. If you haven't actually met someone who is blind, are you glad because you do not know what to say or do?

Do you think that if you can avoid blind people long enough that they will go away?

You may have had any number of answers to these questions, and there are many more that I could have asked.

As you may have guessed, my point is that blindness misconceptions abound among the general public.

As I analyze some of these blindness misconceptions, maybe you will discover some of your own as you laugh and learn along with me.

No, not all blind folks play the piano. I certainly don't.

Let's take a look at an example of the gloom-and-doom mentality of a segment of our society, due to blindness misconceptions.

Many years ago, I had a boyfriend, Matt, who was also blind.

My father had guided Matt into his Sunday school room when two elderly ladies who were talking stopped their conversation long enough to approach my dad.

Learning from my dad that Matt was not his son, one of the ladies commented, "Well, I didn't think you had two misfortunes." "I don't think you'd really call it a misfortune," Dad said as he left the room.

Matt just sat there in silence as the two ladies continued talking, possibly with the assumption that he was deaf and mute, too.

They wondered how blind people manage to watch TV, and they discussed how terrible it must be to have one blind child. They just couldn't imagine how awful it would be to have had two such children!

What these dear, but misinformed, ladies didn't know – and it may be a good thing – is that Matt's little sister is also blind. At least they spared the ears of everyone else in the building.

They knew it would not be worth shouting a question to Matt. After all, they assumed that he was deaf and could not speak for himself.

At the other extreme, there is also a segment of the populace that believes it to be an unforgivable sin to utter something that might not be "politically correct."

To these people, blind is tantamount to a four-letter word.

Some feel it is imperative to use such terms as visually impaired, visually challenged, or even sightless but never blind. (My sincere apologies, folks, for using that B word.)

Of course, these same individuals also believe it is improper to say that they will "see" you later, or to ask you what you "watched" on TV last night.

I must point out to you that while some blind … er, I mean sightless people are offended when they are referred to as blind, the majority of us are not.

As my vertically challenged – short, for those of you who don't know the lingo – and visually impaired friend from Connecticut would probably say, "People need to laugh more."

We must also explore people's misconceptions about mobility.

If a sighted guide is offering assistance, the blind person should hold on to the arm of the guide who walks slightly in front of him or her.

After all, doesn't it make sense to have someone who can see be the one to lead the way?

Yes, people have actually grabbed my arm and pushed me ahead of them! When that happens, I am afraid I will run into something … or worse yet, tumble down a flight of stairs.

Speaking of stairs, they are not a problem for most blind people, unless another physical disability is present.

This also applies to the need for handicap placards since our legs work just fine.

There are only a few instances when one might come in handy, such as at an airport.

When using the white cane, kind folks have often held doors, stepped out of my way, guided me around obstacles, and provided other appreciated assistance.

Yet I must admit that my experience, especially in hallways, does not always fit this picture.

In high school, it was not uncommon for me to hear: "Watch out! Here comes that blind girl! You‘d better get out of her way. She'll hit you with that stick!"

It must also be noted that the public has numerous misconceptions about guide dogs.

A friend of mine who has a guide dog was approached on the street by a stranger who said: "I see you have one of those blind dogs."

Another blindness misconceptions is that the guide dog takes the blind person wherever he or she wants to go.

It is true that the dog functions as the person's eyes, but the person must give the dog directions. After all, that's only fair.

Why should we have dogs who automatically take us places? Even your cars aren't that smart!

I also believe very strongly that people must get past the misconception that we as blind people are incapable of marrying and raising a family.

This is indeed quite possible. I know many blind people who have done so successfully. Some have sighted spouses; others don’t.

Of course, things are not always easy, but I dare you to find any sighted parent who says raising children is straightforward!

I am sure I could go on filling many more pages with various anecdotes of sighted people’s blindness misconceptions. Clearly, their reactions vary.

The way blind individuals handle their own blindness and reactions from the sighted community differs as well.

Perhaps you have learned and laughed with me. I certainly hope so, for we are people just like you.

The only difference is that our eyesight is either impaired or nonexistent. Our eyes don’t work like yours, but everything else does.

I'll see you around!

If you still have questions – or if I have raised more – please don’t hesitate to contact me. As you’ve probably heard many times, the only stupid question is the one you don’t ask! 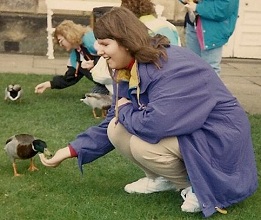 A trip to England
with a school group 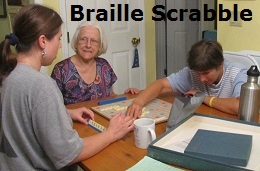 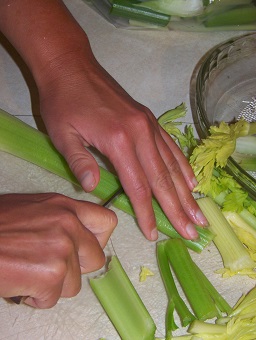 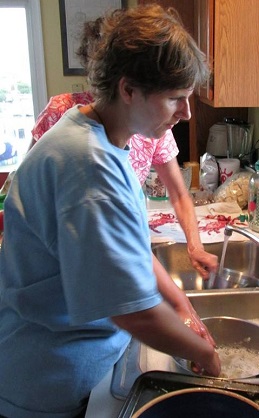 Photos above & below taken by
~Deb Ogburn~ 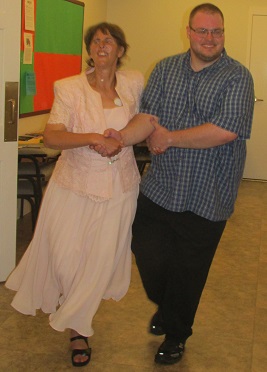 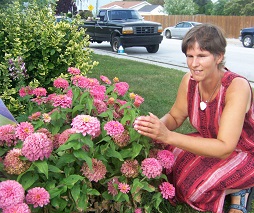 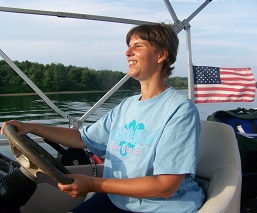 2 photos above & 1 below taken by
~Colleen Donaldson~ 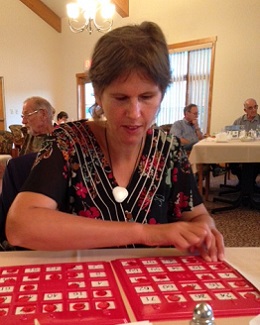